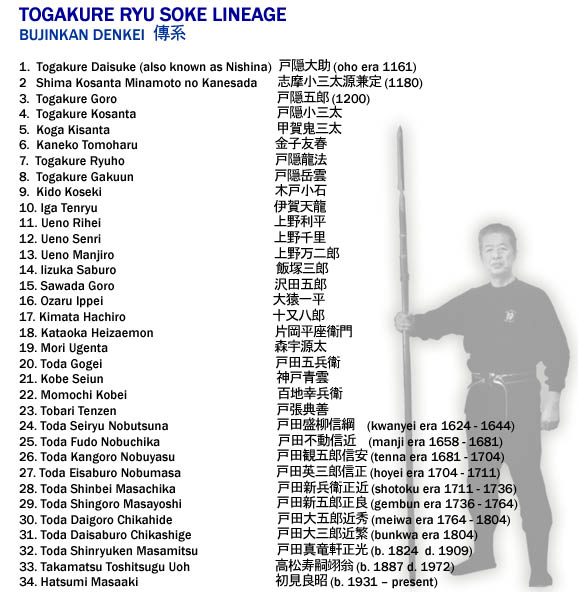 Soke Hatsumi sums up the Togakure Ryu Ninpo in his book Hiden Ninja Submission by saying:

“ It was founded by Togakure Daisuke who was a vassal of Kiso Yoshinaka at the time he lost a war, and, after learning various military arts such as Kosshijutsu and Kenjutsu from his uncle Kagakure Doshi, was in hiding in Iga in the early 12th century. It was initially called Togakure Ryu Happo Hiken but has been called by various names since that time. Iga ninja such as Momochi Sandayu and others studied the ryu and passed it to the Natori family of Kishu and later in the 17th century to the Toda family. Togakure Ryu is known for its use of the Shuko, Senban Nage, Shuriken, and the 4-foot Shinodake used in Suiren. Togakure Ryu Ninpo Taijutsu is a branch of Kosshijutsu.”

The main teachings of Togakure Ryu are:

“Violence is to be avoided, and Ninpo is Bujutsu”.
“Use the sword to be peaceful, and protect country, family, and nature”.

The term ‘kajo waraku’ is used in the Togakure Ryu meaning, “The enjoyment of peaceful harmony with the same effortless compassion as that of the wildflowers.”

The Sanpo Hiden (three secrets)
of the Togakure Ryu is as follows:

1. SENBAN SHURIKEN
A four pointed throwing star, the design of which is exclusively unique to the Togakure Ninja.

2. SHUKO (hand needles)
Also known as Tekagi. These are metal bands around the palm of the hand with four metal spikes projecting from the palm. Another metal band is around the wrist and a piece of leather joins the two metal bands together. This was a climbing tool, and was also used in defense against sword attacks.

3. SHINDAKE bamboo grass
This is a short bamboo tube 4 foot long (1.20m) used to aid in breathing when hiding under water. It was also used as a blowpipe. Sometimes a broken scabbard was put to use as an underwater breathing apparatus also.

Another Togakure Ryu weapon is Tetsubishi with 9 spiked ends, which are sometimes thrown like shuriken.

The Togakure Ryu Ninja
were required to master
the 18 forms of Bujutsu (Martial arts):

Kyojitsu Tenkan Ho (philosophy) is not one of the 18 forms of Togakure Ryu Bujutsu but it was an important part of the Ninpo training.