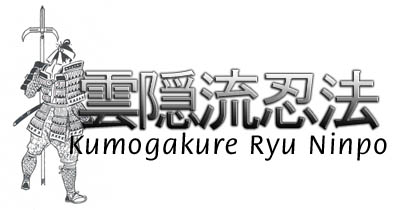 Hiding in the Clouds School

It has been said that this ryu was really created by the Toda family, in the 1600’s as a Ninjutsu school of thought, centering its techniques on the non-violent side of Ninjutsu. The Togakure Ryu teaches that violence is to be avoided. This would also explain why the school’s taijutsu is similar to the Togakure Ryu, as the Toda were also Sokes of the Togakure Ryu.

One of the special weapons of the Ryu is the kamayari (hook spear). Originally designed for climbing up the sides of ships, it was also used when fighting against swordsmen. The Densho mentions a ninja by the name Sarutobi Sasuke, who came from the Kumogakure Ryu. Sasuke used to jump from one tree to another by using a kamayari to hook onto a branch and then swing from one branch to another, just like a monkey.

Another climbing device is the ippon sugi noburi (single cedar climbing tool). This is a metal tube 25cm long, with three rows of spikes on the outside and a chain running through the middle, with a metal hook at each end.

Another specialty of this ryu is the Demon mask sometimes worn by members of the ryu. The kikaku ken or “demon horn strike” (head butt), could also give rise to another theory of the demon mask, supposing that the mask, even when not worn, gave the idea to use the head during fighting.

The ninja of the Kumogakure Ryu wore armored sleeves when going into combat to help protect them and also to use in attacking. Outdoor skills such as lighting fires in wet and damp weather and various other aspects of outdoor survival were included in Kumogakure Ryu training. A Kumogakure Ryu taijutsu skill is to do double blocks and strikes.

Another Kumogakure Ryu taijutsu specialty is to jump while fighting

In the Bujinkan Dojo a chant/mantra, “Shiken Haramitsu Daikomyo” is used to open and close the training sessions. As far as the Bujinkan is concerned it is thought that this was first used in the Kumogakure Ryu teachings. Although this sanscrit chant has its roots in the Vedic teachings some say it is waka (poetry), and shows both Buddhist and Shinto attitudes.